10 Things That Tell You He’s Not For Keeps 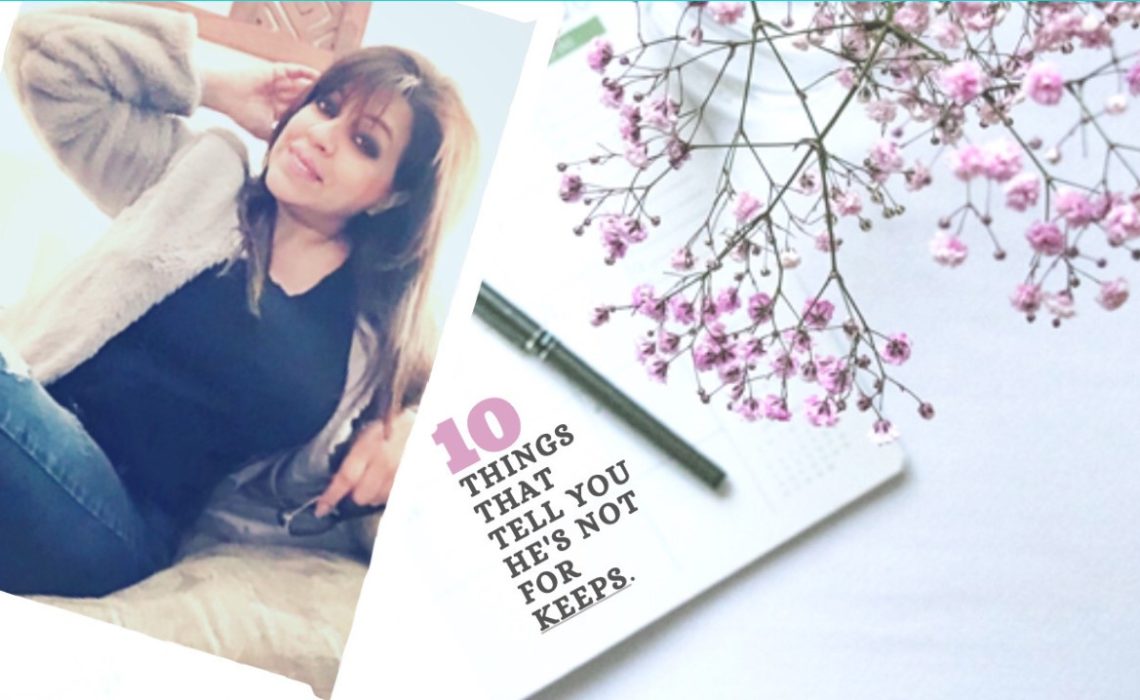 So much advice on how to make tracks out of a bad relationship. You almost begin to measure up yourself as a tiny being on the self-esteem barometer for putting up for years, with something, you should have called the first as the last. I invariably come across women with bright, confident faces but unsure self-questioning minds as they walk through the daily rut of affairs. Any enticement in the magazines or the social media that promises them answers to “Is he cheating on you?”, “Do you know if he really loves you?” “Do you two make ideal companions” or “What gets a man to commit in a relationship,” [and an ongoing line-up of such questions] have them read every sentence [with the applied aspect] with their eyeballs glaring out to extract the most out of the generic advice.

I am writing this blog to share such similar advice [how clichéd]- some out of my personal experiences and the rest coming from friends darkly nonplussed by the double-blind.

A relationship, an intimate one, is the unfailing source of reassurance, comfort, self-esteem, calmness, and bliss. A person in a gratifying relationship derives energy from it to keep up with the challenges of life and stretch oneself beyond the expected roles at work, home, and as an individual. The ‘not so right’ person sucks the energy out of you, keeping you confused and wondering. He knuckles you down to zoom in on him, keeping you fully employed at the back of your mind decoding the mixed messages he sends out and the undying sense of insecurity about your relationship.

2. Lack of Consistency in Behaviour

Perhaps, one of the most common reasons why you continue to thrive in a bad relationship is because there is a random switch from a crazily good time to a heart-breaking lousy time. Ironically what keeps you going is not the soul-shattering memories of how miserable you were made to feel but the happy memories of how flattering you’ve felt over and over. But the sudden extreme changeable comes from an attitude towards the relationship being secondary and low on the seriousness quantum. Lack of consistency in how you are treated and pushed to feel about yourself is a massive indicator of another person’s unstable emotions for you.

Obviously, you’ve been charmed in by someone who has pleasant manners and a susceptible sensitivity towards you. Probably you are always made to feel special, but there is a power-play streak in him mile wide, which he would never admit. This may sporadically show up in the way he walks ahead of you instead of with you; opens a door ahead of you and lets it gently slam on to you. He’d sit in an authoritative posture when you’re with him. He’s is uneager to do bits of things for you like make you a cup of tea. He’s not sensitized to handing over something you’ve been looking at but can’t reach out to. He talks at length over the phone in his usual comfort zone, as though you didn’t exist in the room; and avoids making too much eye contact with you.

4. Not Letting His Vulnerability Show

A quick fact-check here- men are as vulnerable as women when they are genuinely in love. While men are considered to be less expressive than women, their emotional vulnerability towards you would unfold before you in many delightful ways. Those who keep their guards up building a firewall for their egos end up distancing themselves from you with their cold unreciprocated approach to managing the relationship. Such men will find it easier to go on living in a denial mode about their feelings for you and can eventually lead them to choose their own selfdom over you.

While you may be the chirpy bird in a relationship giving out long narratives of what you did, what you dreamt of, what you feel, and so on, that quieter soul may have but very little to share with you. Some men remain rather clammed up about even what they ate for lunch [when specifically asked] or give non-committal responses to what’s going on in their lives. That unsettling elusive charm about how little he shares is but a conclusive translation of the boundaries he prefers to preserve for that emotional disconnect with you.

6. Conveys To You Verbally or Non-Verbally That You’ve Got A Prize.

This one may come as a bit unrealistic, but I’ve actually had men tell women, “Who better than I could you have got.” Whoa! You’ve got a narcist there and trust me he means it with all the serious it could take when he says that to you. A man who keeps himself convinced that a woman is in love with him because he is her best bet. Or she could probably never have got someone worthier. Such a man is actually not self-aggrandizing himself but diabolically demeaning your worth. That’s the under-structure your relationship will be built upon, is all you need to remember here.

While most relationships tend to thrive in those areas of ‘grays,’ there are times when you take a tough call to have a man define or make a relationship statement with you in black and white. Using the silent treatment or ignoring the question as though never heard is a smart way to send out a message to you to back off and not get all emotional on him. The blatant stonewalling is clearly to be seen as a lack of unstated commitment and a one-sided engagement.

8. Usually Does Not Choose You Over His Professional Or Social Commitments.

Now this one is so common, and most of you are punished for whining over your attention-seeking impulses. But you do trust you are a person with realistic expectations, so when a man gives you the feeling that you are not on the top of his priority list, don’t reject your calling. He may be someone who chooses to look at you only once he’s done dissecting all pages of the newspaper. Or puts your voice on hold when he’s on every phone call that is important to him, or even worse- when he makes time to meet up with you only when it serves his own conveniences, you may want to question his sincerity. A simple way to do this is to ask yourself- “Would you have made time for him over what he chose over you?”

9. Stays Disconnected From You For Long Periods.

“Absence makes the heart go fonder” is way too bookish to fit in the overtone of an ideal relationship in this digitally connected world. While we love to think this way but to really believe that he’s probably fighting very hard to keep his feelings in check so as not to scare you away is a palace of illusions you are building for yourself. Someone who is into you as much as you are would need to stay connected with you to feel alive. And just in case you want to go with another theory that he’s busy, remember that no one is too busy to reach out to you- drop a short message or ping a quick call to let you know that you’re an inseparable part of his life. It’s simple, it’s straight, and no rocket science involved here.

10. With Everything Seemingly Right, Something Is Still Missing.

Moving from facts to hunches, there are times when he says all the right things and makes all the right movies, yet there is this nagging feeling that something is not quite right. It is like a chip of block missing, something that can be felt but not spelled. Something you cannot quite put your finger on it, but it is existing. It’s invisible, incomprehensible, yet tells you he is not what you like to bring to reason. A sense beyond the thing that makes sense is something you should pay close attention to. There is perhaps energy between you and him that speaks to you- a voice in your head that you can hear, but do not want to listen to.