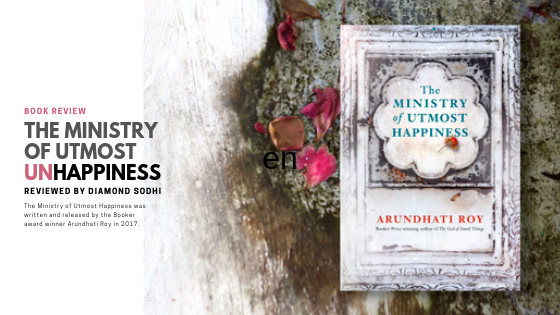 The acclaimed Man Booker Prize Winning author intrigued me first for the nonsensical, boorish gender-biased comment by a senior Indian journalist [need I say the word ‘Male’?] after ‘The God of Small Things’ had not long ago earned her the literary fame and international limelight. Her work was such award-winning material!

Another book after an outstretched gap of twenty years had me hankering for another literary feast. Never had I been impatient enough to put my hands on a book. Buying online would’ve meant waiting for the un-forbearing couple of days, and I don’t happen to be a Kindle person at all. By happy chance, the not-so-well-replenished local bookstore, I checked with, retrenched my wait to a mere fifteen minutes.

I started off un-presumptuously, live again to her narrative ability at cruising around with language for delectably transcribing what her heart felt. The art of using analogies was something the author was still so accomplished at. Per contra, I finished the book past midnight, never having rationed myself on the number of pages I’d read. My tolerable limit for this one being fifty pages a day, and on days I had particularly nothing to do.

I woke up very early this morning to the after-effect of what I had drawn to a disappointing close. And I had myself thinking whether it was a work of fiction or non-fiction; a novel or a documentary; a book without a story or a book with a purpose!

While the story element remains conspicuously absent, it appears to be a book written with the ground plan of reconstructing [to the mind of readers overseas, I guess], what India this day needs to be essentially observed for. Perhaps, a state-of-art- version of India- from the land of snake-charmers and Sati to a country infested with varied genres of an insurgency- delighting the minds of the western readers with a potpourri of anti-state activism in the land of the oppressed.

High on expectations, the book transpires down the lines, I later drew up subtitles for along with the rejoinders of exasperating emotions I intervolved through:

It’s about Eunuchs or Transgender
“Interested!! That’s a near virgin tract.”
A Bit of the Dalit angle thrown in
“Okay!”
Unreserved opinion on Hindu Fundamentalism
“Agreeing, disagreeing to some extent.”
Getting at the entire Indian Political Canvas
“Where is the Story?”
INTERMISSION
The Soul of Kashmir Militancy
“She’s seriously not assigning the rest of the book to this?”
Kashmir [Continued] & its Freedom Fighters
“Reading… Skimming…. Reading”
Kashmir [Continued] & the Anti-Freedom Fighters
“How many more pages to go?”
The Maoist-Communist Upsurge
“Enough, Please!!”

The book is a cheerless and sarcastic commentary on the Indian political profile capitalizing frustration with nothing seemingly right- the meekness of the ‘Turbaned Trapped Rabbit’ [Congress]; the propagandist and riot missionary ‘Gujrat Ka Lalla’ [BJP]; the haughtiness of ‘Mr. Aggarwal wearing an ‘I am Against Corruption’ cap’ [AAP], and the apathy for the ‘Man with the Farex Baby Smile’ [Anna Hazara]. All of that with the hint of characterization is hilarious but very sardonic at the same time. The storyline [if it may be called so] meanders from transgender intolerance to skewed portrayal of militancy in Kashmir across India [exactly!], to an artificially thrown in detour to a Maoist activist girl gang-raped by half a dozen policemen [a ‘Bandit Queen’ inspired gruesome account].

The book seamed in underdeveloped characters with over-depiction of everything that was not in human form. The only elements delivered a character and voice to, were the soldiers of Kashmir [not to be confused with the Indian Army or the Police] for grandstanding their wounds to the world. The lopsided portrayal, however, did little justice to the unqualified truth that all warriors of the state and militancy have their tormenting stories and histories to write.

Maybe, the book was written for the critical acclaim and foreign appetite for what’s not right about India today, and perhaps with the intent and purpose to make it to another award-winning fame corridor. But for me, the book loses me when my mind squanders off from reading the story to reading the author’s mind.