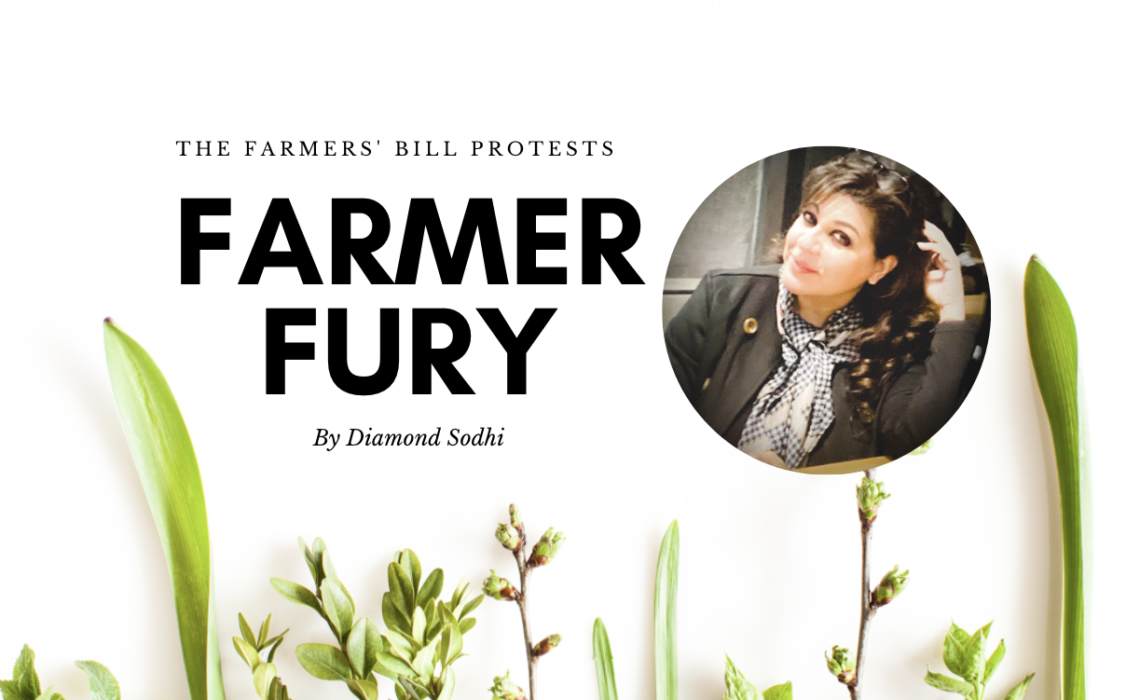 I need to speak in a meticulously measured tone because I would not have the bleakest of support even from my close friends and family quarters on this.

I do not have a well-defined and technical understanding of what the new contentious farm laws are about. Okay, so I should shut up [I heard that!]. But so don’t most of us- social media referencing is not something that amounts to a qualified understanding of a fact. And one dare not have an opinion about the farmer protests for you’d be mobbed and lynched online unless you’re bolstering the cry out.

I see a farmer as a simple man intimidated and threatened by the power asymmetry between the corporate houses and the farmers, that the new farm law reforms propose. The government of India, on the other hand, seeks to redress the distortion caused by the long-standing dominance of middlemen that denies farmers a fair price.

The Farmer Protests in India is now making international headlines for a movement having gained stupendous momentum and garnering support within India and overseas- support pouring in financially and emotionally to keep the protesters’ morale high and brave the odds.

There’s something about the raging movement that I just don’t seem to get myself to subscribe to. I’ll take on the Government first.

The Government of India circumvented the parliamentary procedures to push through the three controversial bills that aimed to ease restrictions on private players in agricultural markets. The bills formed a compelling moot point and should have been put in the open for an uncorrupted discussion. And very importantly, if the government is so convinced about the watershed reforms, why does the government not take it upon itself to educate the farmers and masses at large, to put to rest the insecurities of the farmers? Why can’t a fraction of what is whopped out during the election campaigns be spent to raise awareness about the asset-packed farm bill reforms? The high-handed ‘might is right’ stance should be handled more democratically, at least now.

I stand with the farmers for lobbying for their rights but I do not stand with the euphoria that has subconsciously consumed them and manifested the revolt into a hardnosed protest. The political agenda [which I see as an un-envisaged political compulsion], catastrophically drummed in to navigate the movement to hold off the situation. The genuine farmer has very sadly fallen a victim to the tactical support of motivated divisive forces that have infiltrated within. Most protesters now are either directly or indirectly politically inclined, and many are social media enthusiasts with seething frustrations propelling the power of negativity.

The movement is seen digressing off from a social movement to a political movement using cuss words, drawing pathetic parallels, and using a sick sense of humor to publicly defame the government. The farmer protests have now been reconstituted with an anti-government campaign and a spearheading Modi bashing show.

The Republic Day misadventure was surely not something on an aggrieved farmer’s relief list. A stench of hooliganism shrouding inside the otherwise peaceful protests was brazenly put-on display as the movement’s muscle power with the unnecessary hoisting of a communal flag on the Red Fort. Would it now be possible for the deeply penetrated notorious fundamentalists to ungroup from what started as a peaceful rally? Would blame-fixing the government or the media houses absolve the protesters of the boisterousness that put a hard dent in the farmers’ determined and unhostile march?

I think it’s time for the government to take a resolute initiative, and the farmers to work on a mutual accord and a resolution focussed approach by not creating history marred with violent outbreaks or ongoing suffering of the protestors and adamance over a complete rollback of farm reform laws.