“No Congratulations For Us” 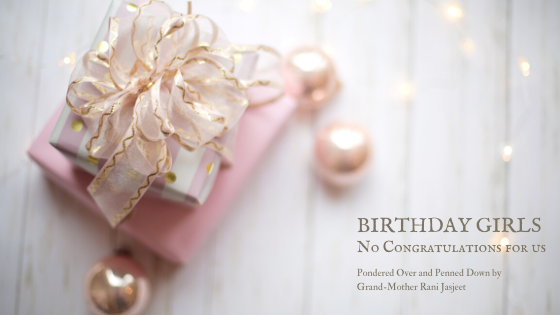 I had always wanted a daughter, but God never blessed me with one. My three children were all boys. Recently my eldest son Haresh was blessed with twin daughters. As the doctors smiled and announced “Both Girls! Lovely Girls!” grimness spread over all faces. “What a flop!” commented my son Naresh, “Bad Shot!” exclaimed my son Karan. “Poor boy!” sighed my mother-in-law.” It’s bad enough to get one daughter. What a curse to have two together.

” Suddenly Haresh arrived. I smiled broadly “Congratulations Haresh, two lovely girls- one is mine.” Nobody else congratulated him. Relatives, friends and servants were waiting anxiously for the announcement of this birth of a son, so that Whiskey bottles would be opened and served in celebration. The news of twin girls was extremely disappointing and so they remained dumb. I immediately got the whiskey bottles and had them served to all. They all drank and satisfied themselves and had the cheek to say, “May God give you a grandson next time.” I gave sweets and shawls to the women servants. They were very pleased, ‘You are so generous Madame, God will bless you with a grandson surely. Long life to your grandson to come! God bless him!”- and not a word about the granddaughters.

It is customary in our family to fire gunshots over the birth of a son, so to express my happiness over the birth of my granddaughters, I had gunshots fired- my daughter-in-law beamed. “How ridi-cu-lous” remarked my mother-in-law “Fancy giving Gunshot Salaami to girls”. Further, it is customary that a string of Shrin-leaves is tied on the threshold of the entrance door by the family sweepress upon the birth of a son. My sweepress had the string prepared and ready but being disappointed put it aside with a sigh. I had it put in the front of my door and gave her the tip she was anticipating. “Who has done this?” questioned my mother-in-law. “I did it” I answered boldly. “You are silly” she rebuked. “You can’t convert daughters into sons by putting up Shrin-leaf strings, a daughter is a daughter and a son is a son!” “I have put it for my grand-DAUGHTERS not sons. Now a day’s daughters and sons are equal, and I prefer daughters” I assured. She really thought I was STUPID.