The Most Haunted Place In Delhi 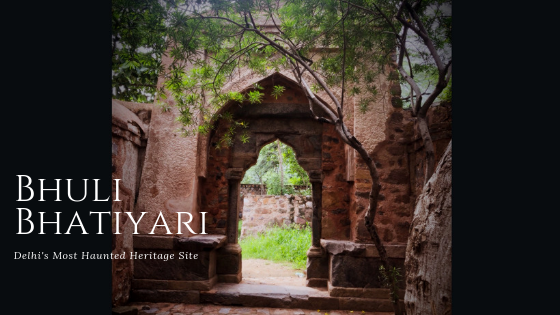 Bhuli Bhatiyari is a heritage site I stumbled upon during my usual surfing at night. The place is described as the remains of a 14th-century royal hunting lodge built by Feroz Shah Tughlaq, the ruler of Delhi between 1355-1388. I quite accidentally got introduced to this conserved hunting lodge during my aimless little time casually browsing heritage sites with no specific objective in mind. What caught me on was this online yowling about the place being the most haunted in Delhi. “Now I’m interested,” I thought to myself straightening my back and pulling up the huge pillow sham resting on my bed. I googled further and the mystery around this monument thickened.

Spooky pictures of the historic Bhuli Bhatiyari Ka Mahal fenced inside a thick jungle of trees and a dense shade closing in seemed to affirm the tale of the eeriness. Every bit of piece written about the historic ruins sent out exhortatory advice- do not go there after sunset; a place you should never want to go to alone; strange noises and ominous rumblings are heard after darkness sets in; and people report seeing ghostly forms or uncanny sights. A blogger also went on to claim that the property which is under the protection of the Archaeological Survey of India [ASI] remains unguarded as no guard is able to survive the spine-chilling haunt of the place for more than a couple of days.

Come Sunday morning and I nudged the on-the-move workaholic inside me to take a break. A quick trip to the high street for my fetish for everything already over-stocked [that’s my OCD beating it out of me] I briefed my driver about going someplace before we headed out of Delhi. Despite him being way too familiar with the city’s labyrinthine maze of roads and alleyways, I insisted on giving him the directions. I guess I felt a bit awkward checking out a haunted place and then I didn’t even know how to exactly pronounce the name of the Delhi’s infamous haunted site.

“A left, and a right from the next exit, and left from the roundabout……”, I faultlessly translated Lady Google’s instructions to the driver in Hindi. And finally we reached that someplace and the driver said rather disdainfully, “Madam, you should’ve just told me you wanted to come around Karol Bagh.” Oh! So this is Karol Bagh?! I thought to myself much sheepishly.

A detour to a narrow meandering road that didn’t seem to be taking one any place significant was the road that lead to the Bhuli Bhatiyari. No directions or signage, nothing seemed to announce you’re there. A quiet lonely road roofed in by trees with a stoned structure lounged against a huge oak tree beside the trail, seemed to be the someplace I was looking for. With my mind heavy with anticipation, I stepped out of the car surveying the air for any paranormal powers. All good there- the air was clean, sunrays honed in on the monument fearlessly and the birds were chirping to the brightness of the day. I walked towards the stairs leading to the main gate which was the only detectable structure that stood the ruins of time. And Ah! at the elbow of the monument, I could see the weather-beaten wooden guard room standing abandoned, true to the horror cries I read about.

I consider myself to be someone acutely sensitive and susceptible to the psychic energy, having the latent clairvoyance to sense the mystic presence. We- my driver, cook and my elder son, were the expedition team with me shepherding them around to enter the dingy rooms that seemed more like cellars and inspect the areas before I considered it safe for me to tread on behind them [mean and smart of me]. I spent extended time on the barren heritage acclaim to feel the vibes, hallucinations, or any form of the non-natural transcendental realm.

The place was just a rubble of solitary and desolate structure waiting to be availed for something more purposeful. The old iron gate gazed into a large square of overgrown wild grass, a courtyard, with no architectural marvel to draw in visitors. Probably, what got people to that place was the thrill of a haunting excursion. I left the place feelingless and wondered why a guard was even installed for a monument that had nothing to guard or a heritage site the ASI appeared rather apathetic to.

Certain of my very personal belief that the place was not haunted I tried to validate the hallucinations experienced by many and relook into the haunted status for some substance. With no queer sensations or ghostly apparitions, other than a monkey that I  saw, I speculated if seeing the monkey was an illusion. Just before I began blogging it while driving down from Delhi, I shyly asked my driver if I told him about seeing a monkey on a rough-stoned wall, and he recalled that I did. Great, so no hallucinations there! “And….did you also see the monkey?” I unsettlingly asked.

Blogs
No Butter On My Toast