The Un-accidental Disclosures of Baru 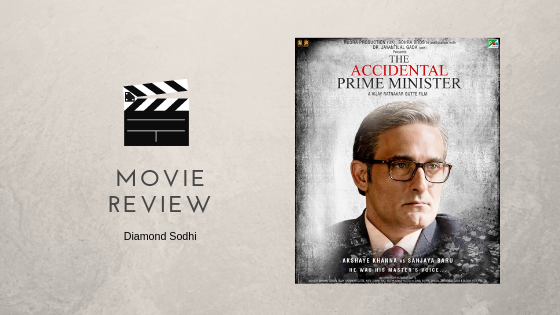 “The Accidental Prime Minister”, the controversial book-turned-movie was something I would’ve unconcernedly waited for to show up on Netflix. But not long until serious trouble for the film began to check-in every day- in the newspapers, on the social media and everything that electronically delivered informational advice.

Nocuous reviews-from downright libellous to deliberately destructive, began pouring out like verbal diarrhoea. The message for the viewers-to-be was more of a statutory warning about the film being a shoddy propaganda against the Congress, driven for political vantage by the BJP in the election year. From the movie’s intent to art, everything was skinned alive-amateur direction, pathetic caricature, lack in editing finesse, jeering question marks on the truthiness, and so on. And I wondered with a mock surprise, Just how often is a film so fine-combed for imperfections? Hmmm…by now I was warming up to the idea of checking out just how flawed and opportunistic “The Accidental Prime Minister” could be [pun intended].

I  thought of the movie as entertaining, to say it all. The eidetic images of the mainstream politicians was what probably drew the audience to the theatres and the flawless theoretical performances kept them gripped. Apart from some conspicuous disconnects and a lack of sense of continuity, the direction wasn’t really disastrous. In fact, the young Vijay Ratnakar Gutte’s efforts in a directional debut film was quite inspiring.

The movie is a satirical narration of Sanjaya Baru’s stint at the PMO as the Media Advisor, when he was handpicked by Dr. Manmohan Singh, to execute his literary writings and political speeches. As a Journalist turned Memoirist Baru’s Memoir minces no words in presenting  the ex-PM as a weak-kneed, spineless politician whom Ms. Sonia Gandhi plucks out of a seasoned pool of aspirants to keep the seat warm for Rahul Gandhi. While we get to see a glint of Dr. Singh’s political vision and economic acumen, the larger portrayal is of a servile, submissive Yes-man [Yes-Madam] who had been tamed to give undiscriminating approvals to the UPA high command. The selective retelling of incidents are pieced together for the audience to empathize with the author’s sardonic exposé of the Gandhi family’s vanity and the voiceless impasse of Dr. Manmohan Singh as the Prime Minister of India. This, being the long and short of ‘The Accidental Prime Minister’!

So, do I see myself as yet another someone slamming a jaundiced review? Yes and No! My assessment about the movie is from a different latitude, quite entirely.

I have to begin with this- what stood out as glaringly odd was the swanky charmer Akshaye Khanna who so ill-fitted the role of the book author, the real Sanjay Baru.

Seriously, when the director painstakingly got everything finely detailed from capturing the looks to the moods of the cloned characters, why did he shirk from employing a look alike of Sanjaya Baru? Therefore, the director’s strongest exploit was ploying the classic social psychology function- a loveable, charismatic narrator [the fourth wall] interacting with the audience for a favourable  perception and positive evaluation of Baru’s  validation-seeking opinions. As it goes- The songs sound sweeter when sung by a charmer. Getting the real Baru look- alike would’ve got the audience searching for the exit doors.

In a  disclosure  there’s someone out there who’s bound to be affected by your thoughts and perceptions, and trust me this was heavy disclosure of unvalidated truth. An acute sense of responsibility needs to be checked along the skewed views and opinions of the author, which may be his own, and not everybody else’s. Writing a memoir is about how the author sees the world and not how the world in reality exists.

The timing and intent of the book couldn’t have been more sinister. Baru’s book has been written with a whiff of journalistic arrogance and not much sincerity [defying a memoir’s rule] where he chooses to betray the silence and manipulate the meekness of a Prime Minister who in fact kept the economic indicators high during his tenures. Or was he trying to give Dr. Singh an image makeover through his book. Seriously? I mean, seriously?

In an interview with the NDTV, I heard the author respond with a defeated ‘No” on being asked whether Dr. Manmohan Singh ever interacted with him after his book stood on the stands. That’s something to think about- Who knows, Baru’s creative non-fiction may have been the revenge of a writer through the unforgivable half-truths of his Memoir?