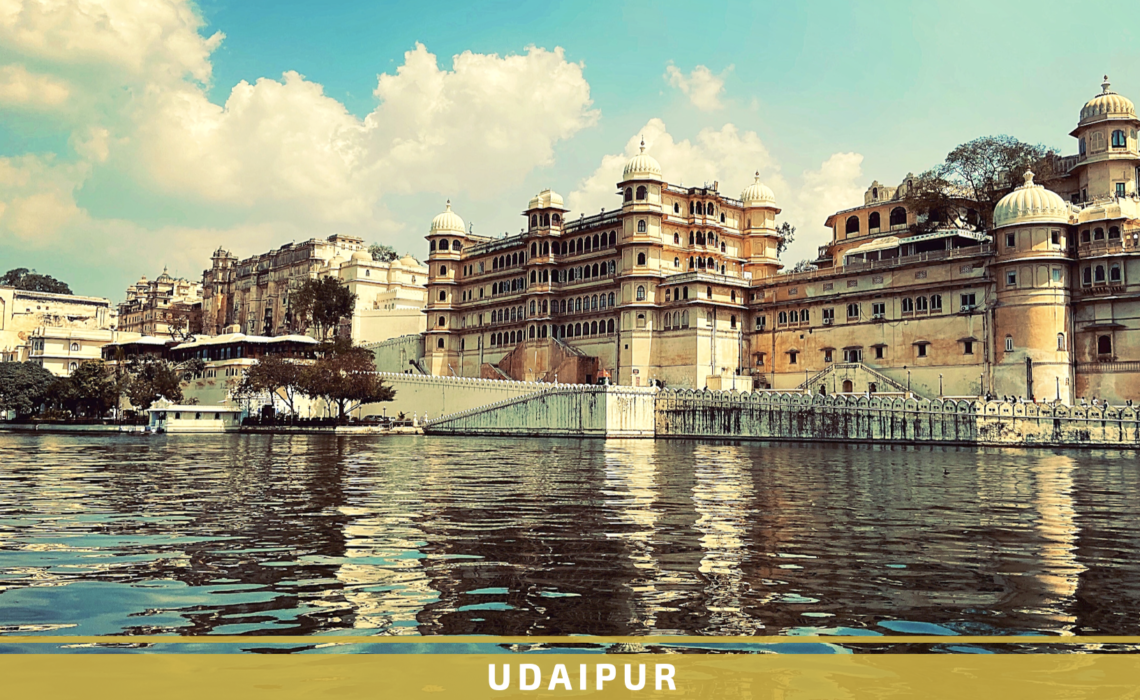 It was the imageries of the iconic, intricately crafted, milky white “Chattris”-symbolic of the Udaipur architecture-pillared alongside the clear blue lakes of Udaipur, that made me go stark raving mad over the City of Lakes-Udaipur. The exoticness of the City Palace and the turquoise lakes redefining the extravagance of the city of luxury in hospitality had me picture the city of Paris inside Greece.

The only way to get to these flamboyant and magnificent hotels is to cruise through the lake in a steamer boat that is ornamented to reflect the ambience of the super-deluxe hotels, petting and flattering the guests with the royal charioteer who sails from the lake-shore to the heart of the lake. The soft sounds of the lashing waves on a breezy dark starry night shimmer with the the scintillating hotel lights that add to the grandiosity of the hypnotic landscape under the sky.

Okay, I stand corrected here- it’s basically one major lake called the ‘Pichola’ lake that is the home base for all the opulence in Udaipur. While other lakes such as the “Dudh Talai” and the “Fateh Sagar Lake” pander to the recreational pursuits of those looking for an affordable lake sight experience, “Pichola” [meaning the rear side of the Udapiur’s idyllic City Palace] grandstands the ostentatious chains of hotels such as the ‘Taj Lake Palace’, The Oberoi Udaivilas’, and ‘The Leela Palace’.

And to take on a different streak here- I wouldn’t really like to think of Udaipur as the City of Lakes here. And I do that for one simple reason- I liked the blooms bordering the lake way more that the lakes with mushy shored laced with dirt and trash. Thanks to the uncommon character of the common man- Whoa! If it could take something like a signage slapping a” $500 Fine for Littering” right at the first exit out of the San Francisco airport, a Five Hundred “Rupee” would do the magic just as well in Udaipur!

The City Palace, with a portion housed by the Royal family and a part opened to the public showcased the history of the ‘Mewar’ dynasty of Rajasthan. The royal structure, on the hilltop, afforded the visitors a panoramic view of the old city of Udaipur hugging the palace, cascading into newer and modern buildings as it spread out on the periphery. I couldn’t help but size it up against the mesmerizing Amer Fort of Jaipur. “Spectacular” was a word I could just not even get close to, in my mind. “The palace needs a serious renovation at least to cover up the patchy walls with the paint cracking off” I thought to myself unsmilingly. Perhaps, the poor restoration had to do with the incumbent royal family being self-contracted for the upkeep. The dazzling Crystal Palace- a must see- was something I chose to skip for the air conditioning and the insulation, and a higher probability of being packed with foreigners who I saw as one case of Coronavirus per headcount.

The part of the city I liked the most was the Queens’ [Yes, am implying more than one] garden called the ‘Saheliyon Ki Bari’. The royal garden with the colorful blooms and lush greens, housed various fountains including a thick forest-like enclosure that sounded like rain in a jungle with the fountains flowing. The stony path paved through the lotus pond and the blossoming flowerbeds was sparsely strewn with all shades of pink and white flowers that wasn’t anything short of spellbinding.

The ‘Badi Lake’ tucked away from the main city mirrored serenity with clear skylines and softly mellowed hues of pinkish orange sky. And a drive on the eight-mile-long narrow road travelling along the “Fateh Sagar Lake” would live up to the definition of one long romantic drive.

I’ll wrap this up with an axiom, “Find your own sense of what the city means to you”, the lakes, the palace, the hospitality, the tight lanes of the Old Udaipur city or the blooms that got me to call it the ‘City of Bougainvillea’.